Earlier this week, my friends and I went to check out a store named Momo back in china town. I’ve never once set foot in there, although I did know that Momo meant Peach in Japanese! Alas, there were no peaches to be found.

We heard there was a fashion event going on (models in cute clothing, check!) and turns out they’re from Japan. Arriving early helped since the show started around 4pm but eventually a crowd of people began attacking them for their autograph AND picture; I personally got both…

Well, besides that, they were promoting themselves so if any of you go to Sakura Con this year, keep an eye out! O_O You might spot them. Unfortunately, I won’t be there. Why? Uh, does YOUR wallet like to be raped for your personal needs? Cuz My wallet likes to have at least some money inside, so no Sakura Con for me.

I am very excited! Why? Because I got to go to Momo a shop in Chinatown and guess who came?! Sebastian Masuda and his 2 shop girls from 6% Doki Doki, a popular Harajuku shop in Japan. There purpose: to help save the style of Harajuku. Due to the earthquake and tsunami devastation in Japan, not many tourists come and shop around Harajuku.

However, to raise awareness, Sebastian and his shop girls Amy and Yuka have traveled the world to raise the awareness. They have gone to London, Paris, L.A., and other places!

It makes me very happy because I have never seen people with this style before. I used to think that dressing in harajuku was a costume type thing, but it is a style altogether.

I asked Sebastian what he thought about Seattle (in my broken Japanese) and he said “it is a very nice town.” When I asked Yuka this question, she answered saying, “it’s very pretty.”

I also got to take a picture with Shop girls Amy and Yuka! 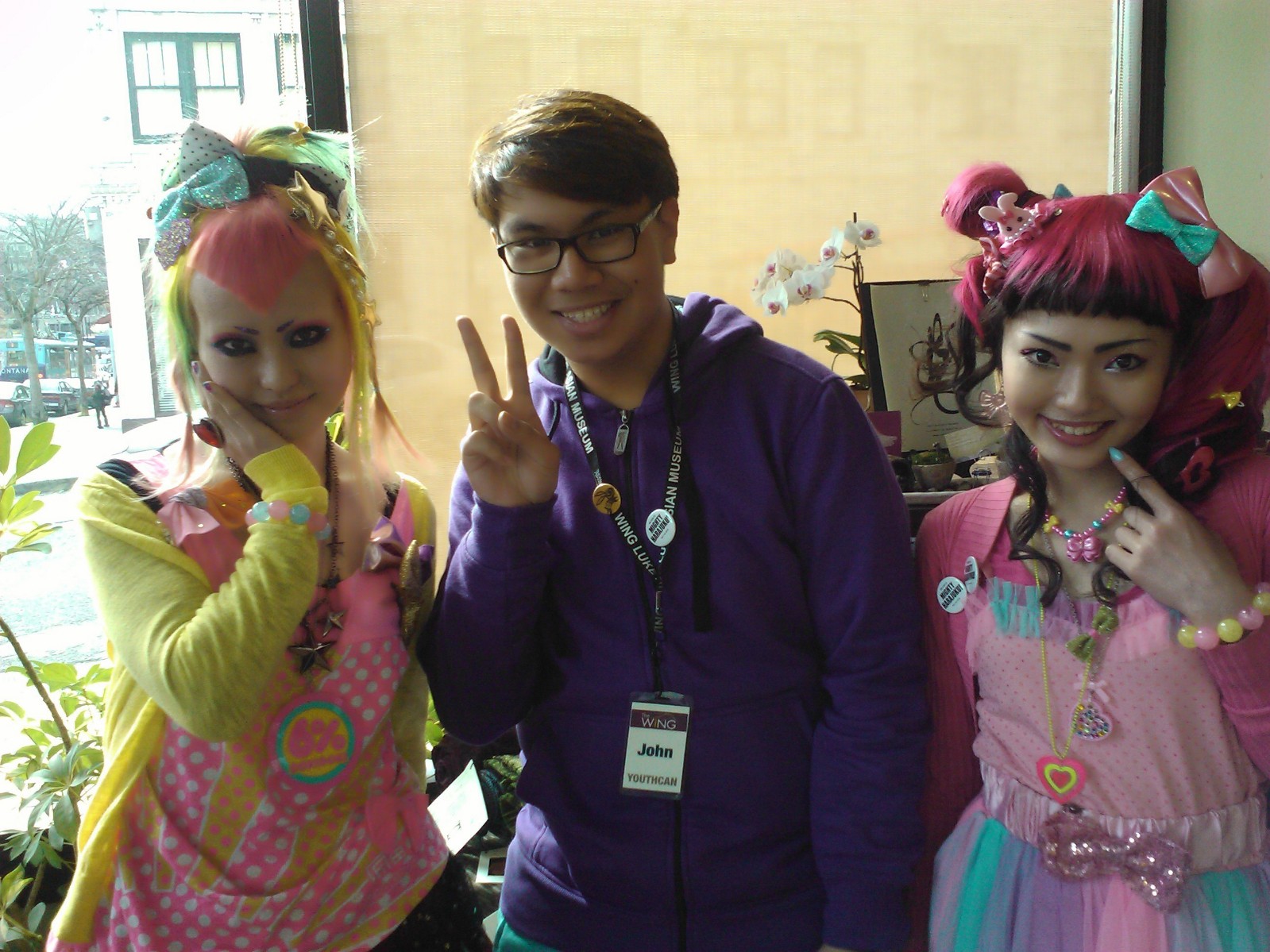 OH AND THAT’S NOT ALL, I ALSO GOT THEIR SIGNATURES ON MY IBUKI MAGAZINE!! 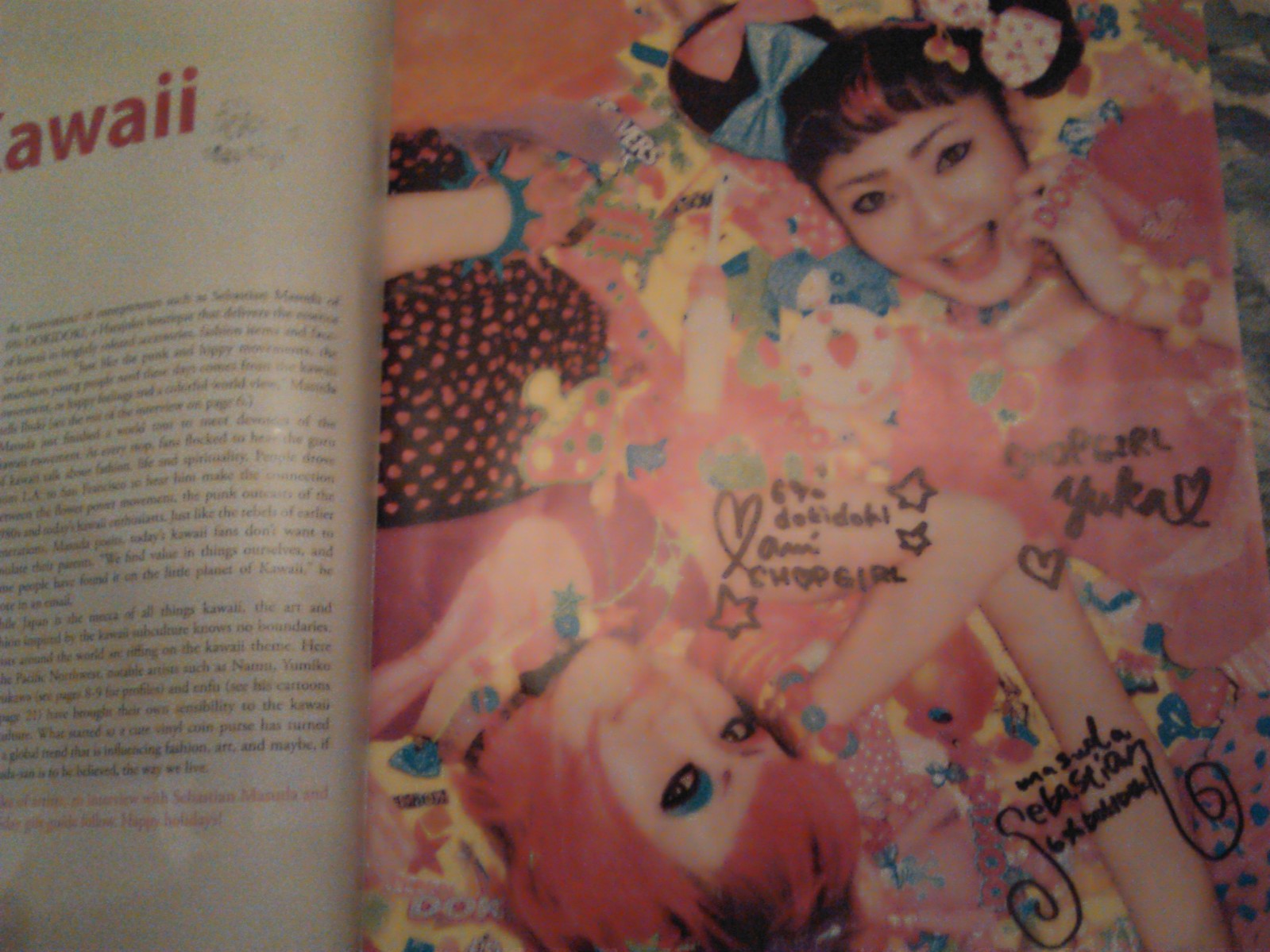 One step closer to my dream. What dream is that you may ask? Well it’s the dream of being in Japan and seeing my favorite Japanese group Perfume! How am I a step closer?
Earlier this week my fellow Youthleads and I were brought to a store called MoMo in the ID.  They were holding an event to create awareness on what’s going on in Harajuku, which is famous for its unique clothing stores such as the 6% Doki Doki. I got to meet three awesome people: Sebastian Masuda who is creator and two very pretty girls Ami and Yuka. The girls style was just the “head turner” you expect to see at Anime conventions, but in Japan it is a great fashion sense. I had a wonderful time being there as I got take pictures and get autographs from them. I was so nervous that I was shaking while handing them my magazine >.<

I even found out that speaking Japanese for the first time was very nerve wrecking but it turned out well! Not only that, but there were 3 of them and Perfume is a group of 3. Sometimes i wished it was Perfume that came ^.^ , but nonetheless these people that visited are awesome! They gave me more motivation to try my best to learn Japanese and try to go on vacation in Japan. They’d also appeared Sakura-Con. I spot them walking into the Convention center but didn’t attend because this year i failed again to cosplay as this guy:

Here are more pics of our trip!

This entry was posted in Art, Events. Bookmark the permalink.