It would be my first time to be leading the youthCAN group and I was so nervous, that at one point, I couldn’t say anything! My fellow youthLEADs, Brian and John, arrived an hour early to set everything up with me, which consisted of a lot of moving around. As the time was nearing to start, our new recruits were gathering and lo and behold, there were faces I didn’t recognize O_O so it was great that so many people signed up for our program because it meant things would stay lively!

Our day together was filled with introductions and bonding activities, such as ‘I Love My Neighbor,’ so I am indeed pleased to say that not only did we all have fun, but we all learned a little bit more about each other! I have to admit, I felt a sense of accomplishment right there, haha. The scavenger hunt was the biggest event of all. I sort of wish we hadn’t added that it was a race because as soon as we split off into three individual groups, we all ran like our lives depended on it! 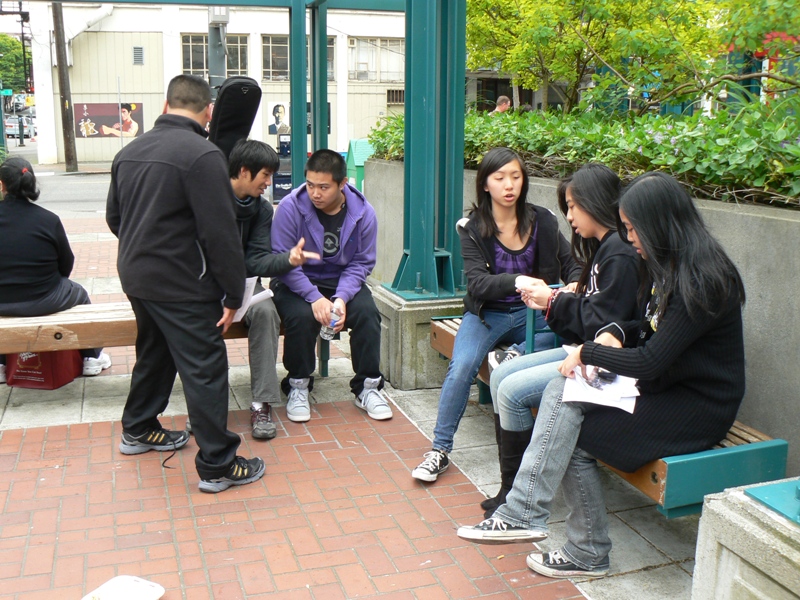 The first clue was found in the stairs up from the lightrail tunnel of Chinatown. Once that was discovered, our group had to find our Youth-coordinator, Josh, for the next hint. Luckily, he was nearby, but to get the clue to the next destination, we had to make a poem on paper folded like an accordion. We could only write one word for each line. I remember how my team were trying to usher words out of their heads in a hurry, but we came to focus on Seattle rain and how it was pretty, but also a pity. Weird, yes, but it got us the next hint!

This time, we had to run all over Chinatown because we couldn’t exactly figure out where the map wanted us to go. You know what’s so embarrassing about being the leader of the group? When you’re the SLOWEST. I did, however, got to know more about the ones in my team. For instance, who was most competitive, who was the fastest, who was most chill, etc. They were all cool people! So, thanks to our other youth-coordinator, Mario, everyone was able to get to the second clue. It was at another art place where we had to fold a gigantic paper crane without using anything but our hands. No tables, no floors, no nothing to prop up against. My team got creative by having one of the boys kneel on the floor so we could fold on his back. At first, I was terrified that no one knew how to fold a crane (I had just learned the technique a few days ago myself!) so I was relieved to hear that some of my teammates knew origami.

From there, after saying bye to our artist-teacher, Jonathan, we returned to running -.- Oh man, I was totally not in shape. I had a camera with me to take snaps whenever I could, but it was fun even though I had a hard time catching my breath, haha. We found the second artist, Paul, at one of the buildings where we had to think of a sentence connecting these three different words that he gave us, and add a beat. Ours was definitely lame! I didn’t mind though, because we were all eager to get to the next place. The final destination was actually at Qwest Field where we met Josh again, who then told us to go inside for the Seattle Green Festival. Everyone was so happy to finish the scavenger hunt; it really did get us all pumped. 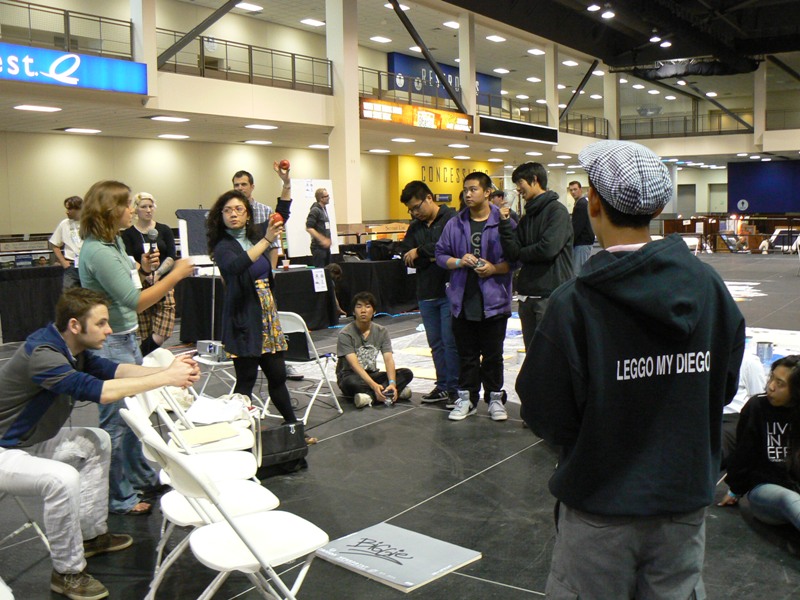 Once inside, we were all hit by the amount of various booths. We, however, were heading towards a specific one. It was on a stage with numerous chairs, thankfully since we were a particularly large group of teenagers. We were fortunate enough to receive water and granola bars, yay! The people started talking to us and so we moved closer to get a better look. They gave us a presentation about the environment and we started discussing things like:

Car, or walk? I thought that cars were convenient, but they let out bad fumes. Walking was free, but there’s also the temptation for people to litter.

Rivers, or the ocean? The ocean can be beautiful, but it has lots of mysterious creatures in it! Which is why I chose rivers, even though they can still have dangerous animals like snakes in them…but hey! Salmon, and all that good stuff, right?

Vegetables, or fruit? This was an easy one for me. Sure, I’ll eat veggies but man, fruits are sooo tasty and they still give you vitamins! It was hilarious because everyone was on the Fruity side while only one of our friends, alone, was on the veggie side. It was pretty entertaining and we were in a good mood 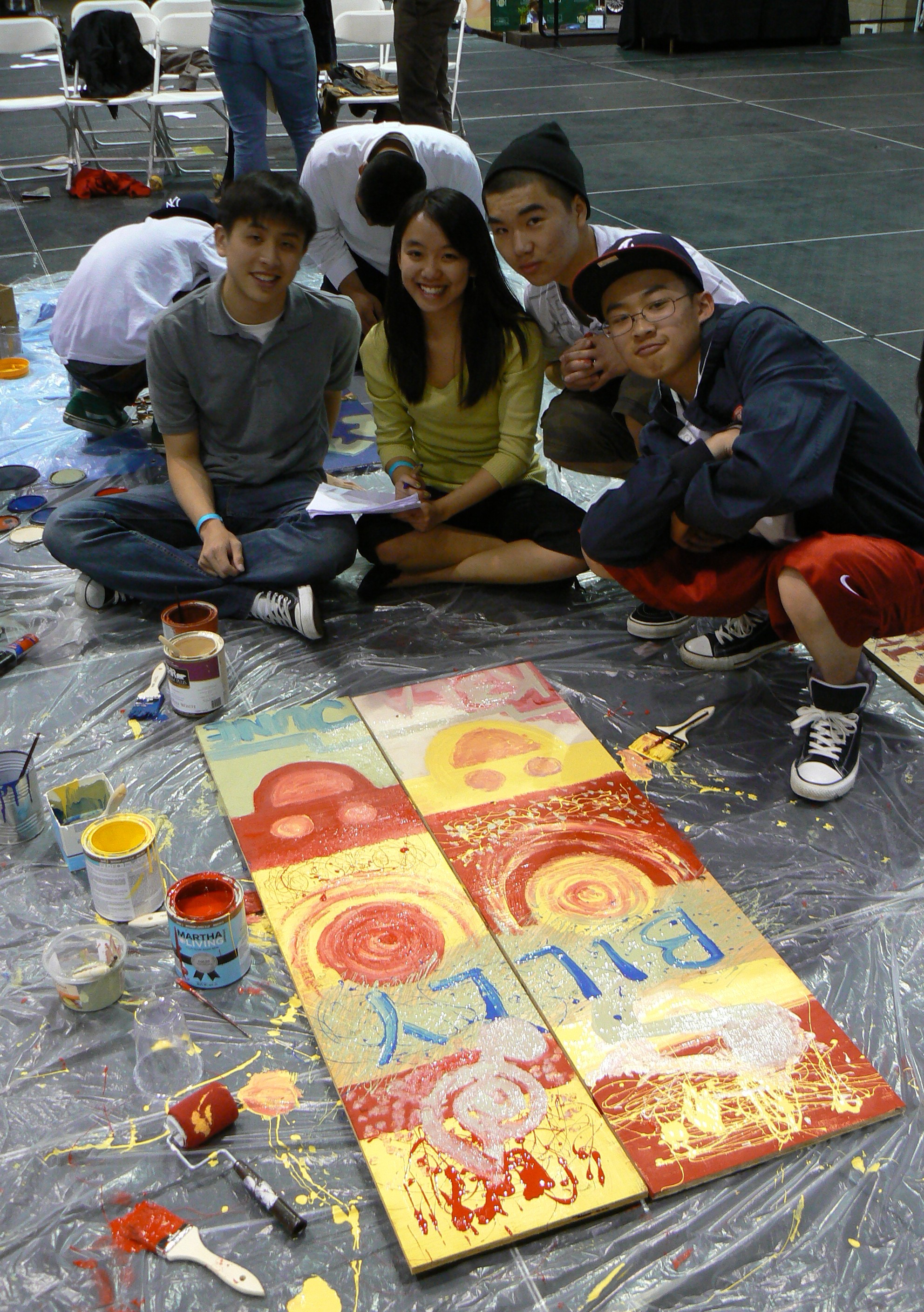 Afterwards, came the absolutely favorite part of the event. As seen above, we were allowed to paint and do whateverrr we liked to the boards they had on the ground. Seriously, give a group of teenagers with blank boards or paper and say “Go crazy with it” will bring interesting results! They told us that copies would be sold on Farmer’s Market and the profits would go to the program, so that made me go “Ooooh~” 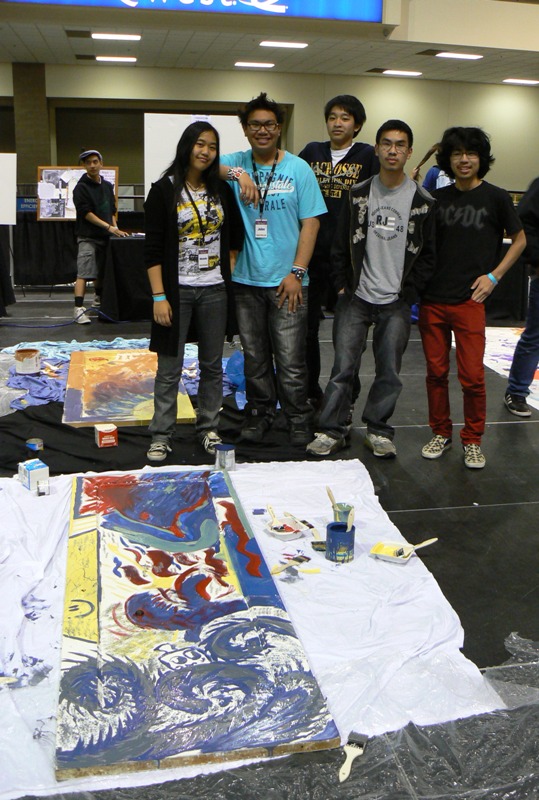 I write fan-fiction. I draw. I want to go into Business and Art. A weird combination, maybe. I don't like spicy food very much. I love comedy. I want to see the world. I don't know how to swim. Knowledge is key. I strive for happiness and success.
View all posts by Meirouki →
This entry was posted in Uncategorized. Bookmark the permalink.