OMG! I had such a blast at the YouthCAN orientation last Saturday on the 21st of May. It was very awesome; I’ll go through high lights from the day.

So we started out with a basic exercise where we got to know one another. Boring right? Not at all. The other Youth Leads and I introduced ourselves and YouthCAN with so much force and happiness.  Enough with the gloating and let’s continue on our journey through this orientation.

After doing some ice breakers (which we got yelled at by the museum), we went on a scavenger hunt: going through from Joshua Hiem, to Jonathan Wakuda Fischer, to Paul Kikuchi and finally off to the special ending place!  Each of the Youth Leads (and Mario) had their own teams; of course mine was “Team Sexy”.

We started off running to find Joshua Hiem in the Sound Transit Center in Chinatown.  When finding Josh, he forced us to write a poem, one word from each team member.  It came off hilarious, and when we finished, we headed off to Jonathan, who was located in an art gallery up the hill from the station.  He asked us to create a GINORMOUS crane using only our hands.  We finished, thanks to my awesome origami skills, with a crane…which obviously looked like it was rushed like hell!  Anyway, we continued on to where we found Paul at the Union Station…RIGHT BY THE SOUND TRANSIT CENTER (so basically we ran down the hill, up it, and down it again…to end up in the same place). Enough with the raging!  Well, Paul asked us to write down a song and sing it in a chorus.  It was a hot mess!!! 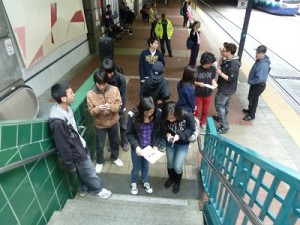 YouthCAN looking at the text on the stairs for Josh's awesome thing!

When finishing we received the last clue telling us to go to Qwest Field. BUT WHY?!?!?!?! We ran there, and eventually found Josh, who gave us tickets into the GREEN FEST! 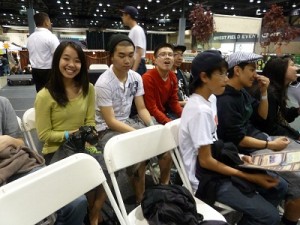 Now this is the awesome part: Green Fest.  YouthCAN was invited to come into the Seattle Green Fest and make art.  Yeah, the new recruits had to show off their skills at orientation.

This wasn’t any ordinary art; it’s more like “recycled”.  You see, we received a lesson about carbon footprints.  Which was better?  Walking or taking the bus?  How can taking the bus, or driving impact our world?  How can our pollution impact the water systems?  Which is better an organic apple from California, or a generic apple from the state of Washington?  These questions created a base for the YouthCAN recruits due to our working with nature over this upcoming summer.

We used our knowledge of global warming, carbon neutrality and other ideas to answer these questions.  We ended up realizing that if an organic apple made all naturally and safely, but was shipped a thousand miles from here, the carbon footprint can still be equal or somewhat the same to the generic, pesticide full apple which was only shipped fifty miles from our local super market.

This art we created was through paint on recycled pieces of wood and from a full door.  My piece was based on the evil pollution monster attacking the Eco-Friendly bird.  It shows basically an apocalyptic battle (Haha, get it May 21st).  The Eco-Friendly bird had a lovely bubble of water, which as we know is vital to the earth, while on the other hand, the Pollution Monster had swarms of cement, which water cannot go through and thus, no life.  In the end, we see that the water breaks into the cement because eventually we know that water, when turned to snow makes pot holes in the cement.  It’s long and awesome.  I have to thank Zenwa, Michelle, Edwin, and Yulong for their awesome skills in helping me create the story of the door and we know they did most of the painting! 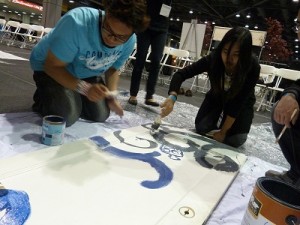 The beginning of our piece!

Other people created beautiful pieces of work and I enjoyed looking at them.  I would like to thank Mr. Mike O’Brien and his assistant Sahar Fathi for inviting us to work on this art work! Also, if you guys get a chance, they will be creating little prints of our work and make sure you check them out during the Farmer’s Market!  You can also buy them.  LOOK FOR THE BIRD AND POLLUTION MONSTER!!!!!!!!!!!!!!!!!!!

All in all, I had an awesome time and in the faces of the new recruits, they seemed to have a great time as well! BTW, stay tuned to more awesomeness from us! ;]

Let's Go Party Now...cause CAN'T NOBODY hold us down!!
View all posts by chocoboi_key0monXP →
This entry was posted in Uncategorized. Bookmark the permalink.