In the late 19th and early 20th centuries, many Japanese men and women left their lives in Japan to work in America.  They traveled across the ocean for better lives: men left Japan to avoid the Russo-Japanese war, or hoping to gain money for their families; the women came as picture brides, to leave behind their past and to start a new life. As soon as they boarded the boats to America, they faced hardships: the loss of family and community, discrimination in the new land, and even trouble finding love. 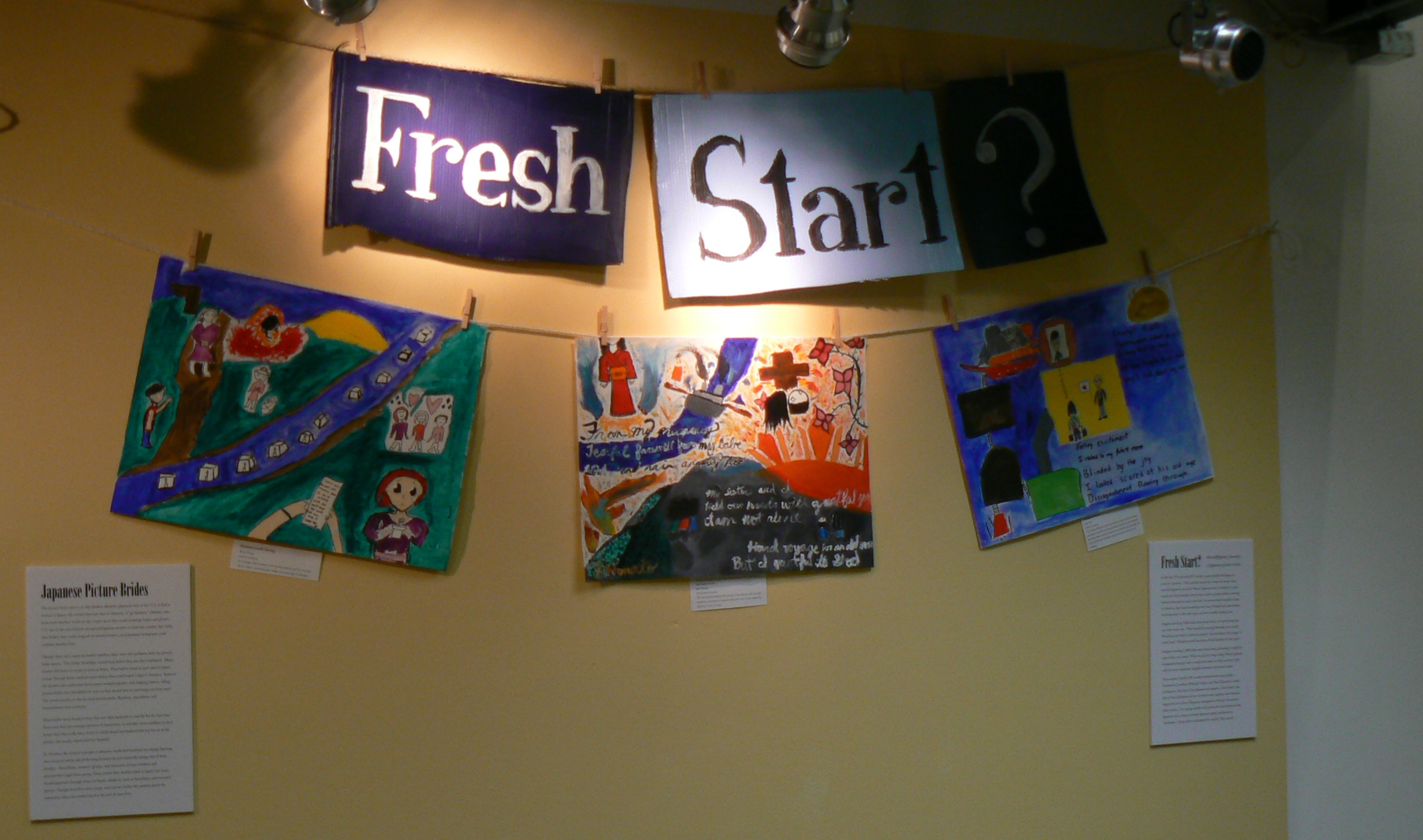 Imagine traveling 5,000 miles away from home – knowing it might be years before you returned. What would you have brought along?  The Japanese immigrants usually brought only a trunk with them on their journey, carrying only the most important tangible memories and items with them.

This summer (summer 2011), YouthCAN students worked with artists Junko Yamamoto, Jonathan Wakuda Fischer, and Paul Kikuchi to create art based on the lives of the Japanese immigrants. Fresh Start?, the first of two exhibitions of our summer work, explores how distance shaped the love lives of Japanese immigrants, through the picture bride system.

In the early 1900s, a picture bride was a woman who exchanged photos and letters with a man overseas before agreeing to marry him. Junko Yamamoto, our teaching artist, guided us as we worked to tell the story of a picture bride or groom through painted canvases and Tanka poetry.

She first showed us all kinds of manga (comics) and older Japanese art that incorporated words and pictures, in hope of finding inspiration. We also looked at primary sources: in this case, actual diaries of a picture bride and groom. We listened to lectures on Japanese immigrants to spark our minds as we went over ideas.  Then we began brainstorming ideas for our own story.

Brainstorming was the most time-consuming part of this project, but we eventually figured out what words expressed the emotions in our poetry best. Then we went straight into drawing: working our way towards telling a compelling story in either the picture bride’s perspective or the man’s. We had most fun painting with acrylic paint on our canvases because that is when all of our efforts came to fruition!

Each one of the paintings hanging in this space contains different characters, journeys, and feelings. Look closely at all of them and experience the adventure our picture brides and grooms underwent in their journey from home in Japan to their new home in North America. 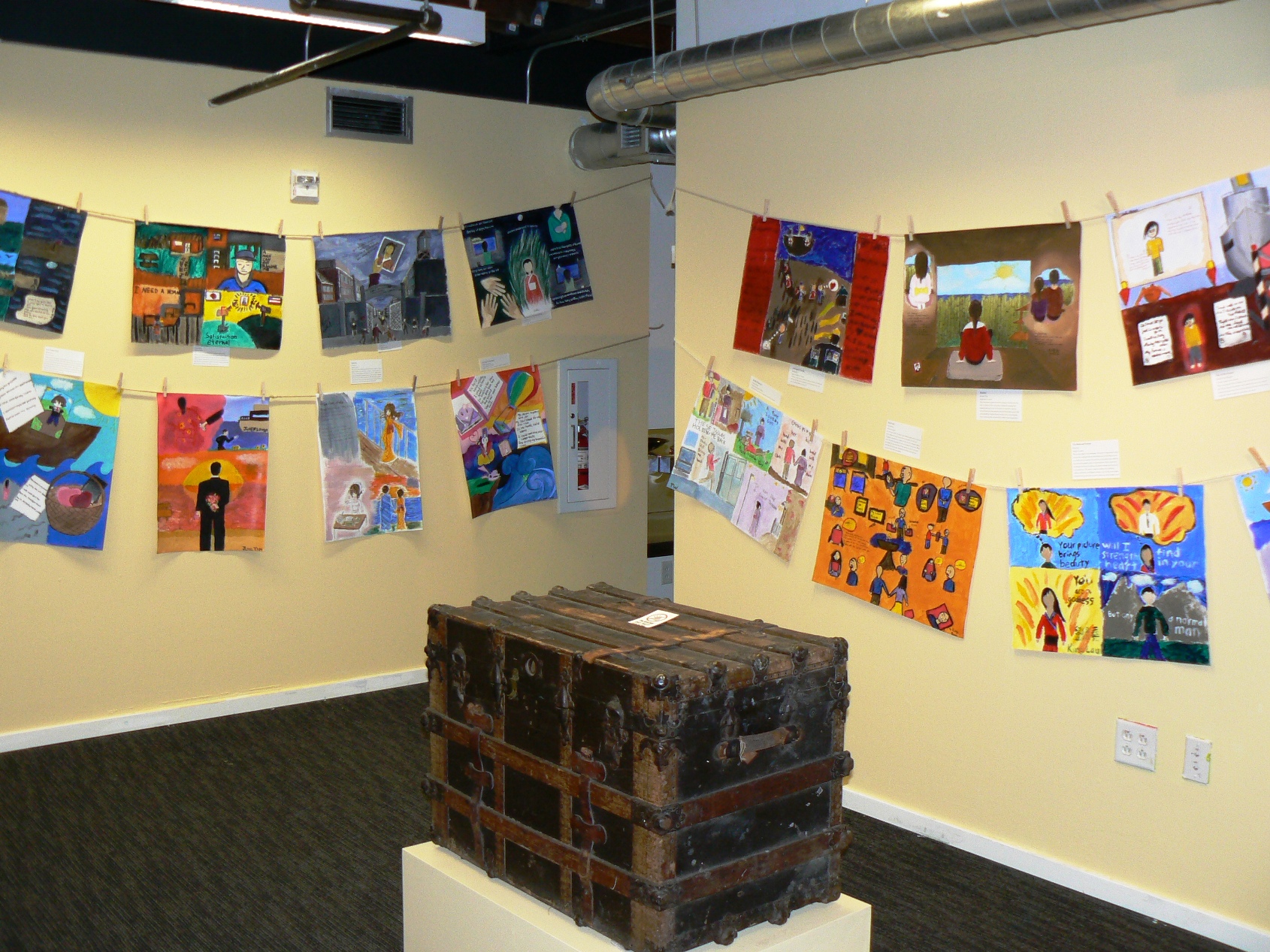 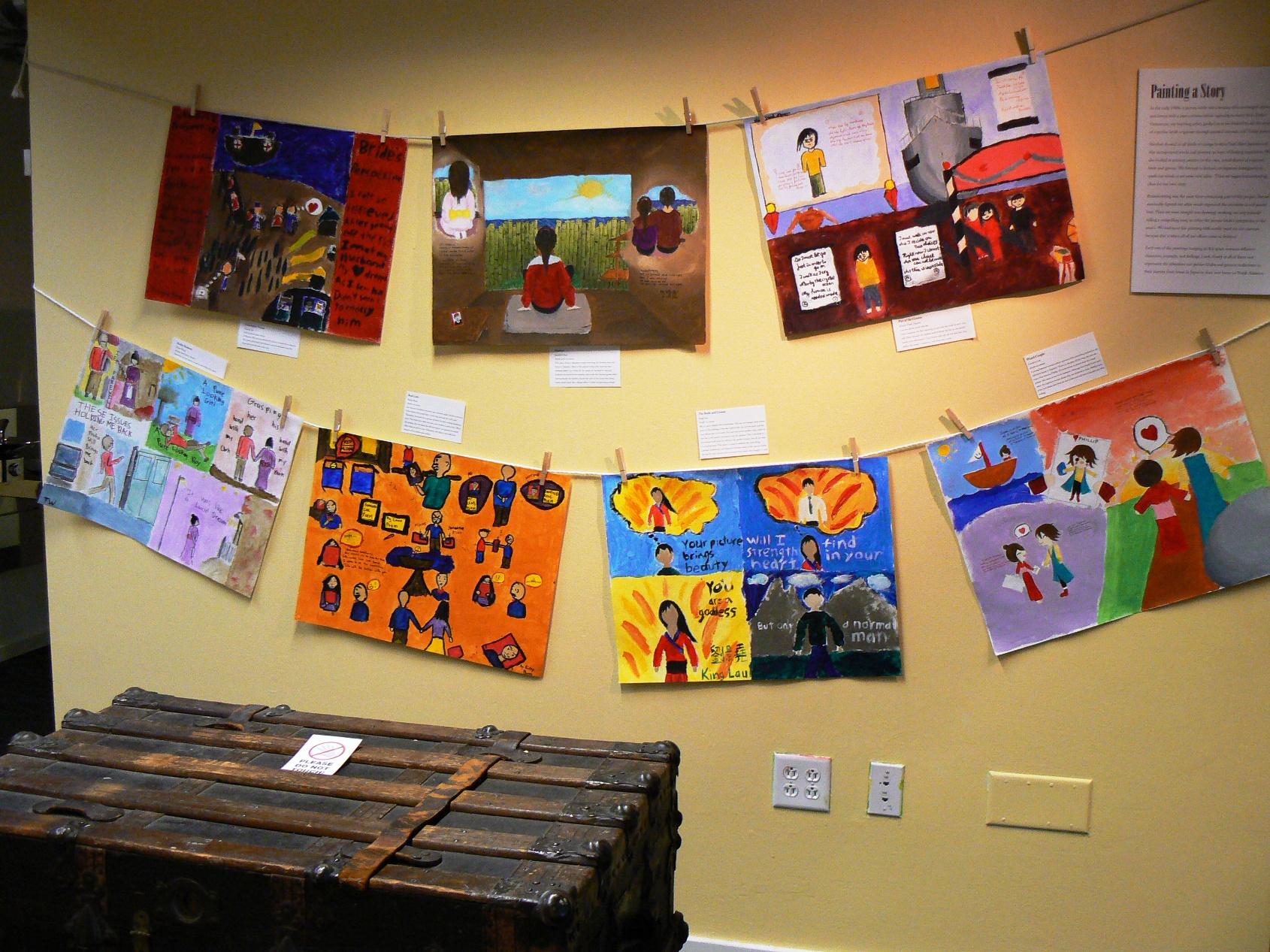 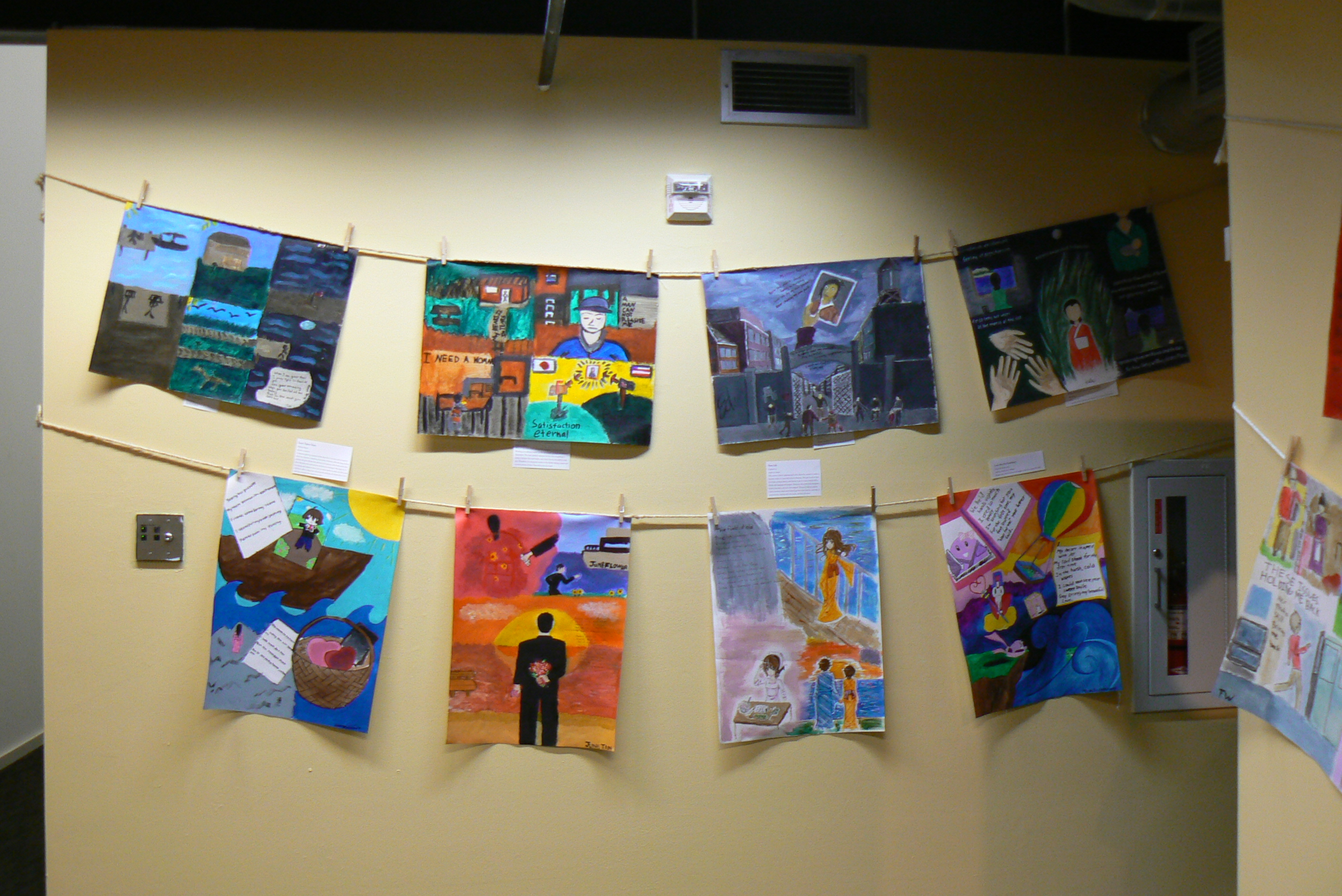 Imagine moving 5,000 miles away from your home… What would you bring along?  Most Japanese immigrants brought only a steamer trunk with them on their journey.  These trunks were only big enough to transport a small load, forcing travelers to pack only their most important tangible memories and items.

With the help of artist Jonathan Wakuda Fischer, we constructed miniature steamer trunks showing the juxtaposed (contrasted) lifestyles and ideas that the Japanese immigrants lived through, based on the differences between Japan and America at the time. For example, the juxtaposition could be the different foods the two places have, or the closeness of family back home versus feeling like a stranger in the new land.

These trunks are made from heavy paper printed with trunk-shaped templates. Painting was performed either before or after the piece was assembled. After the trunks were put together, two pieces of Velcro were attached to act as the metal lock real steamer trunks had. 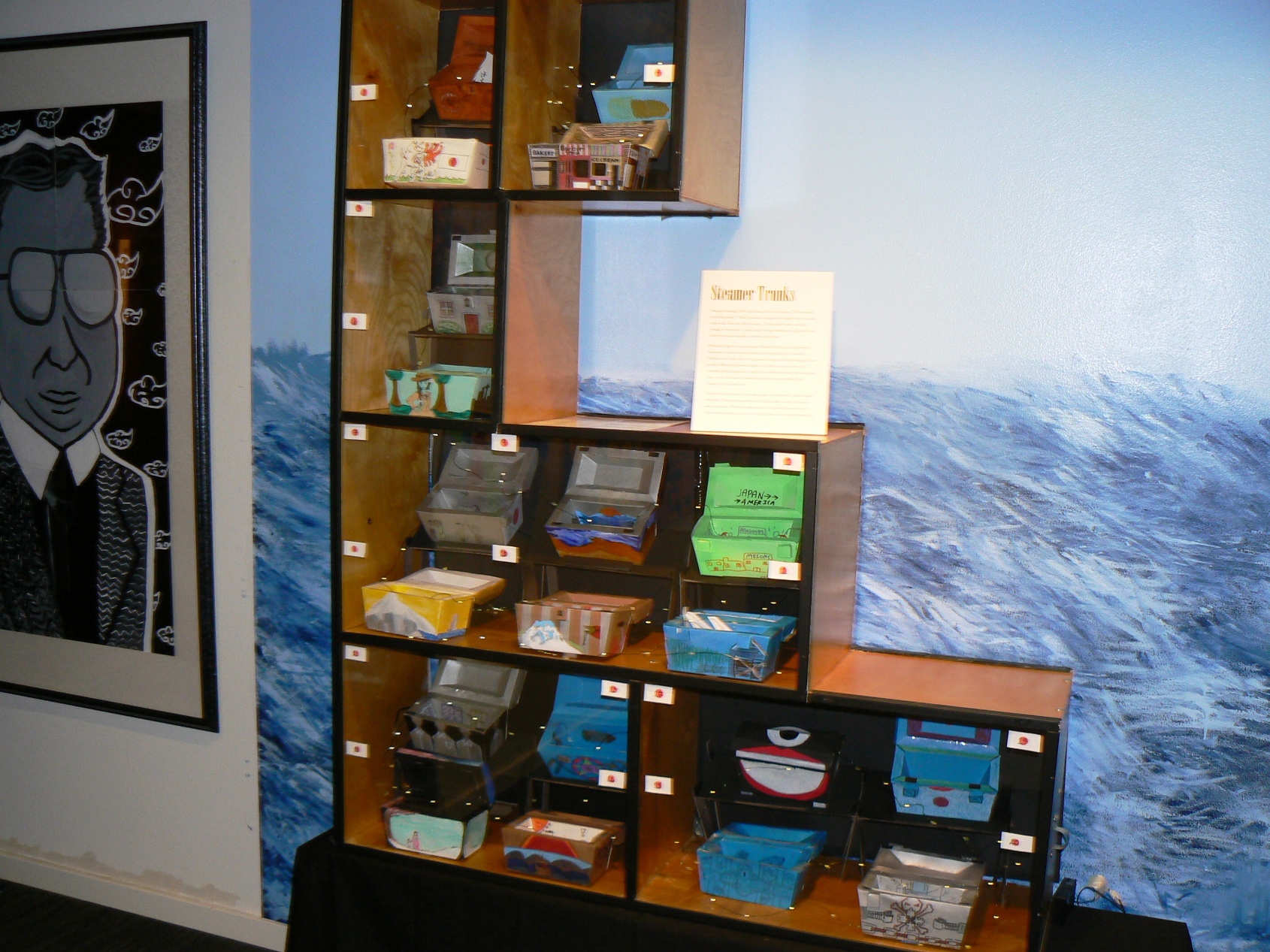 We used Tanka poetry to express the feelings and stories of picture brides and grooms.  Similar to the Haiku, Tanka poetry is a Japanese style of short poetry using similes, metaphors and personification. Traditional Tanka poetry often portrays nature, emotions, and LOVE – which is why we chose this form.

The Tanka takes the first three lines of the Haiku and adds two lines at the end, each with seven syllables. 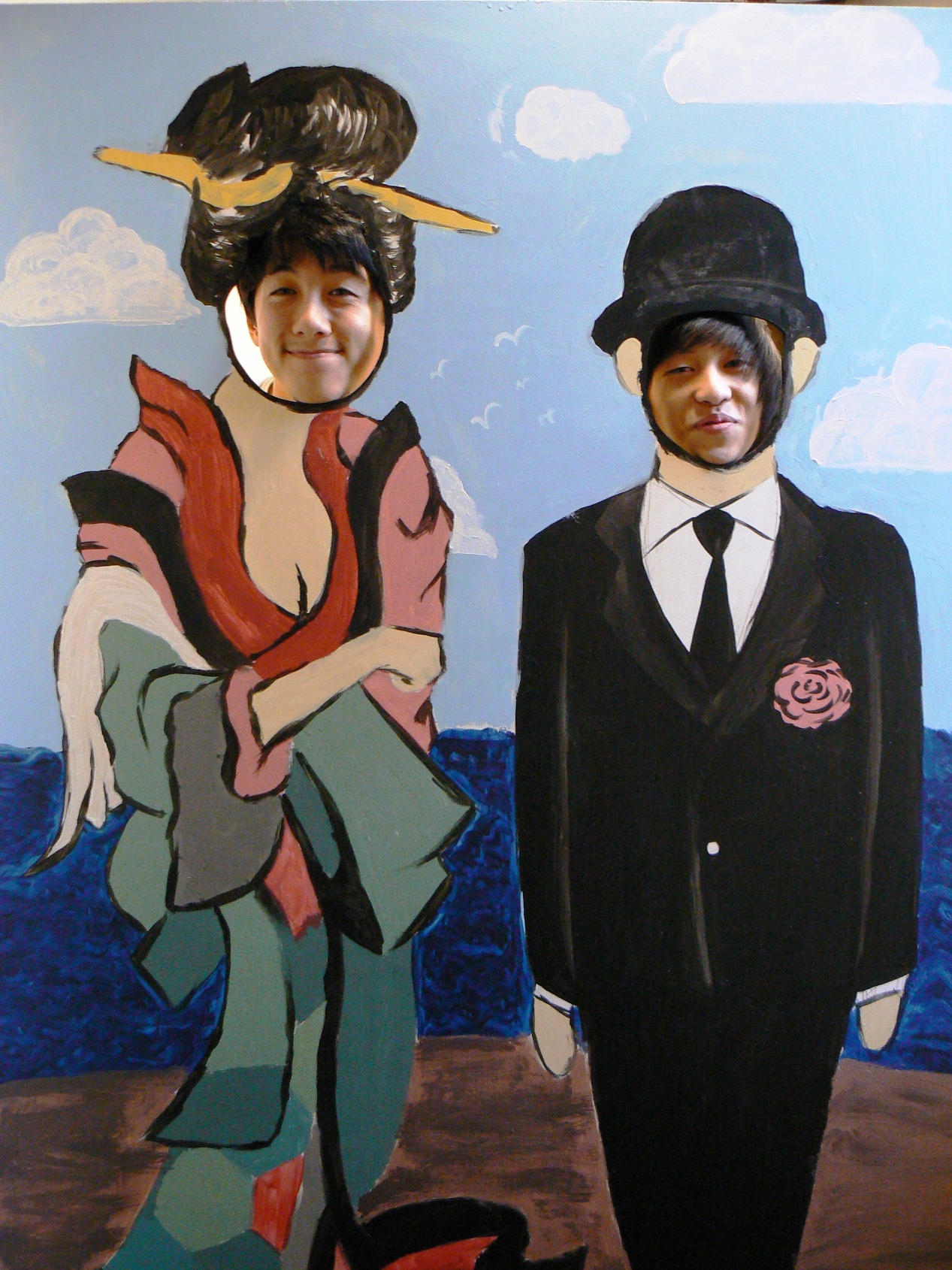